Freshchat now lets you embed a widget in any site - the Web Messenger. The Web Messenger lets you engage with and manage queries from your website visitors - both anonymous and logged in users. It will appear as a widget on the bottom right corner of your web page. Every message that comes in from the Web Messenger will be treated as a separate conversation in the Freshchat inbox.

Note: The example user data has to be replaced with real data that helps in getting actual user information on all of your web pages.

You can restore user conversations for logged in users, every time they initiate a conversation from a different browser or device. To do so, for every user, an unique external ID and restore ID has to be defined.

1. Paste the entire script from below on your website.

Note: External ID should be unique for each user. Example: Email ID of each user can be defined as their external ID.

3. init() and fcWidget.user.get() start running when a user logs in for the first time on your website.

4. When a logged in user sends a message on Freshchat messenger for the first time, the user gets created in Freshchat, with information from fcWidget.user.setProperties() and call back function for user creation runs.

5. Parallely, restore ID is created in Freshchat for that user and will be available on fcWidget.on(‘user created’) event.

6. In if (data.restoreId) condition, add your code to save the restore ID from Freshchat to your database.

8. Finally, pass this restore ID to Freshchat in init().

Use this command to set user properties on Freshchat for users.

Freshchat allows you to track any events performed by your users. It can be anything, ranging from updating their profile picture to adding 5 items to the cart. You can use these events as context while engaging with the user. Events can also be used to set up triggered messages or to segment users for campaigns.

Widget customisation allows you to set up your Freshchat web widget with customisations such as custom strings or color or chat backgrounds.

Below are a few screenshots of a widget where the values/strings that can be customised are highlighted. 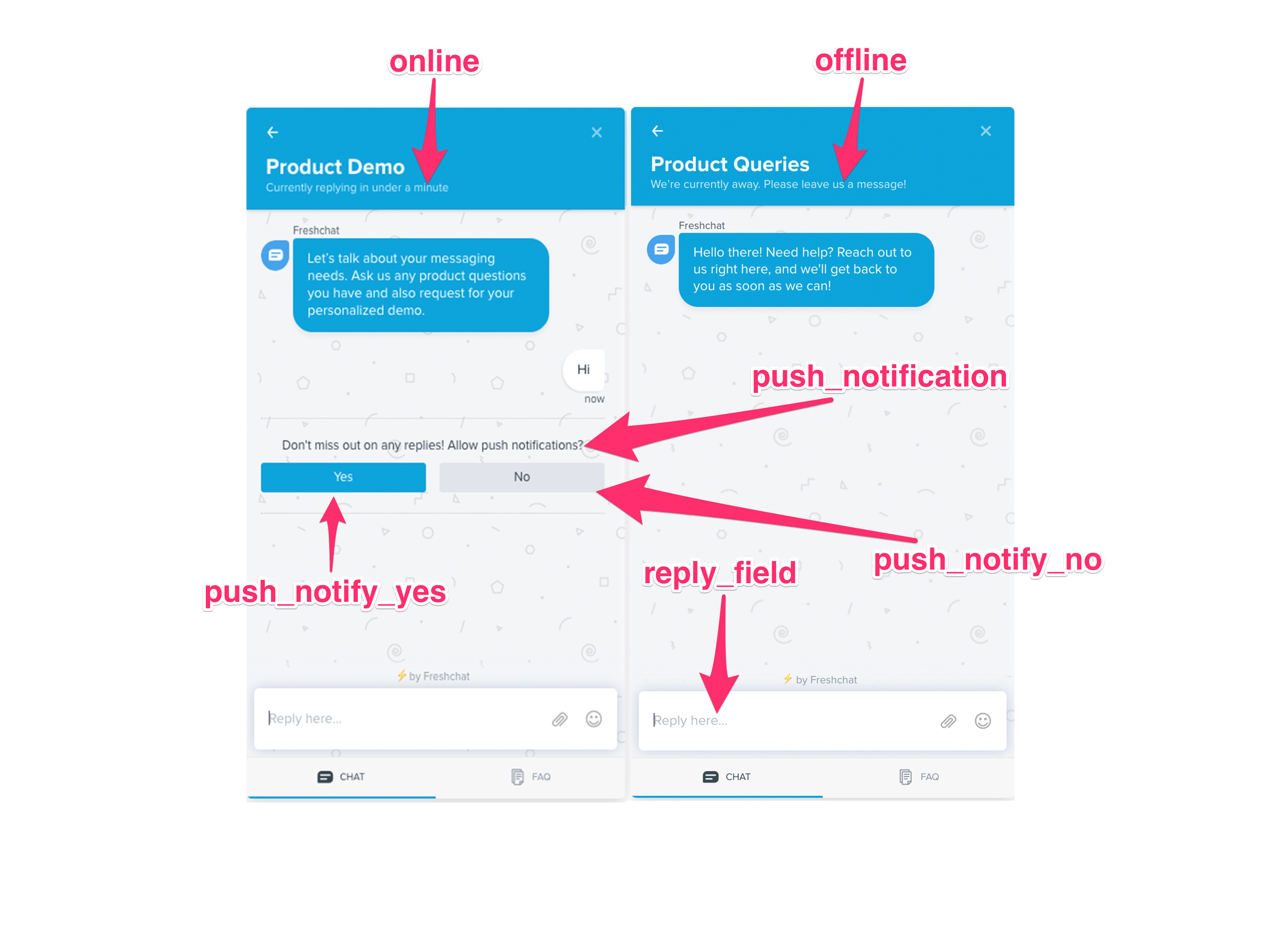 Sample code with all available customisations

Note: Please note that the older version of the code had {{time}} which will also work properly.

Sample code for Freshchat to open automatically into the FAQ screen

Freshchat's web widget now supports the ability to use a custom font. Just provide the font name and font URL within the headerProperty object in the widget config. If it is a hosted font such as Google Fonts or Adobe Typekit, the sample code will look like this.

If you'd like to use a commonly available font such as Arial or Times New Roman, you may provide that for fontName. In that case, fontUrl is not needed.

Note: If the widget is unable to load the custom font, it would default to the local system font.

If the tags are set when the init is set, relevant channels will appear when the widget loads.

The tags can also be set later for specific web pages using Set Tags (only the latest selection will be updated for the channel list). For example, if a user is on the 'Payments' page, these tags will show only payment related channels on the Web Messenger. If he's switching to the 'Deliveries' page, Set Tags help show channels relating to deliveries during transition. Once Set Tags are called, the channel list will immediately be updated.

The lowest priority is the Default Language which is set in your Freshchat account. If none of the three values below are not available Freshchat will automatically load the widget the default language. This will be the primary language that is specified on your Freshchat Account.

If the browser language is not available, then the next step for fall back is the Operating System Language.

If there is no language specified on config, the widget will pick the browser language automatically. If there are multiple languages set on the browser it will take the primary language always.

Code to set Locale on Freshchat

If you want the Freshchat widget's language to be changed dynamically based on user selection such as language dropdown, the locale has to be set when the dropdown is changed. You will have to use the command window.fcWidget.user.setLocale('en') to specify the language in that case. Please refer to the sample code below for better clarity.

Tags can be added to FAQ Categories or FAQ Article while creating or adding them. FAQ Tags allow you to filter and display specific FAQs or Categories on web pages.

How category and article tags work?

There are two types of FAQ Tags, which can be set to filter FAQs or Categories.

If the FAQ tags are set on initialisation of the Freshchat widget, relevant FAQ categories/articles will be loaded when the widget is opened.

The tags can also be set later for specific web pages using setFaqTags (only the latest selection will be updated for the channel list). For example, if a user is on the 'Payments' page, you can set FAQ Tags to display payment related FAQs. If a user switches to the 'Deliveries' page, this funciton will help show FAQs relating to deliveries during transition. Once setFaqTags are called, the FAQ list will immediately be updated.

Responses for the first 4 commands

1. widget:opened - Triggers when the widget opens

2. widget:closed - Triggers when the widget close

3. widget:loaded - Triggers when the widget loads

4. user:created - Triggers when user is created

5. unreadCount:notify - To check if there are unread messages

This event will give you the number of unread messages. Mostly used when the default Freshchat bubble is hidden and a custom button is used.

To check whether the Freshchat Widget is open.

Opens the Freshchat Widget with optional parameters including channel id or name.
The replyText parameter can be used to set up custom text in the text area of the widget.

To check if the Freshchat Widget has already been initialised.

To check if the Freshchat widget has completed loading.

Removes the widget. Widget will have to be re-initalized again to be shown.

Once you enable user authentication for a particular user, an encrypted key is generated from your end and passed on to Freshchat. Subsequently, whenever the user logs into your system and initiates a conversation on Freshchat, Freshchat receives an encrypted SSH-keygen command to decrypt the authentication information, and thereby allow authenticated users to continue the conversation.

What happens during JWT user authentication

Let us look at how to enable JWT Authentication for Web and Mobile usecases:

Freshchat lets you decide what kind of users (logged-in/logged-out) can be allowed to initiate a chat with you. The information required by Freshchat for logged-in users is different from logged-out users. Let’s look at both the processes separately.

A token that does not have a Reference ID & UUID will be rejected. If a user with a given Reference ID is found, the user is updated with details from the token and conversations get restored on the SDK screen. If no user is found with the Reference ID, the user will be created when they send in a message.

Freshchat requires a reference-id to uniquely identify the user from your system. Beyond the required attributes listed below, you may optionally send additional user profile data. This data is synced between your user management system and Freshchat.

Freshchat_uuid is an ID generated by the Freshchat SDK/WebWidget, to be invoked by the integrating website/mobile app and to be included in the generation of the JWT for the user.

We use the ssh-keygen command to generate an RSA public key private key pair with 2048 bits as key size and admin email id as the comment.

The ssh-keygen command is part of the OpenSSH suite available form https://www.openssh.com. Download and install OpenSSH for your respective OS if you dont have it installed already

Parameters to be sent in JWT Token:

reference_id is provided by the customer and is used to restore the conversation. Only freshchat_identifier and signature are mandatory